A combative midfield warrior, Lee started his career at Derby County and was an integral figure in Jim Smith’s side that gained promotion to the top-flight in 1996. Unfortunately, The Rams could not keep hold of their more prized assets and financial problems dictated that he was sold to Blackburn Rovers for £3.9million in March 1999.

Unfortunately, Rovers were relegated at the end of the season and keen to return to the top-flight to consolidate his position in Mick McCarthy’s Republic of Ireland squad, he was eventually sold to Coventry City for £2.5million in December 2000. It was a case of deja-vu as City also bit the dust but not short of admirers, he made his Premiership return in February 2002 when Walter Smith took him to Everton for £1.9million. 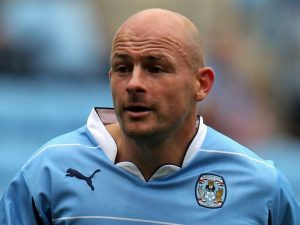 A choice of three

If there was a ball about at my primary school, Lyndon Green, in Birmingham, I would be in the thick of the action but in those days I never used to follow one particular team on TV or the terraces.

My family are made up of Aston Villa and Birmingham supporters but as I grew up, I used to watch the team where I could get free tickets, be it those two, Wolves, West Brom or Walsall. However, I’ve always wanted to be a football and the game started to get serious for me when I joined my first Sunday team. I joined the 3C’s (Catholic Community Centre) at the age of 10 and stayed for five years, playing the majority of my football as a defender. During this time I represented the Birmingham County side and the West Midlands district team, while training with Walsall, Birmingham City and Derby.

The first club I trained with was Blues, having been spotted by a man called Mick Morris, and we used to train on the Astroturf pitches at Highgate. Usually, there would be 350 kids turning up and it was a nightmare. It went without saying that I enjoyed my football more at Walsall, and at Derby. I trained with three sides because I wanted to keep my options open for as long as possible, but when it came to the crunch of signing schoolboy forms, I decided to sign for Walsall because I felt happiest there. However, my dad had other ideas and told me to join Derby because they were a top-flight club and had more stability. I was gutted because I loved Walsall and felt really at home there but in hindsight, it has all worked out well for me.

I played a lot of my youth and reserve team games at Derby as a centre half but had a little too much enthusiasm, so it was decided that would try my hand further up the pitch in the centre of midfield. From my age group, 30 players were taken on by the club but only Dean Sturridge, Kevin Cooper, Mark Stallard and myself have gone on to make successful careers out of the game which goes to show just how competitive the game can be.

As I was making my way as a youngster at the Baseball Ground, we had the likes of Peter Shilton, Mark Wright and Dean Saunders at the club and I was in awe of them. Young players back then were treated totally different to today and when I was an apprentice we would be cleaning the stands, changing rooms and cleaning the boots. If we didn’t come up to standard, we would get a smack from the older players and it was quite intimidating for a young kid.

Still, I worked my way through the YTS and professional ranks and was given my first-team chance in the First Division under Roy McFarland during the 1994-95 season. I played on the right wing against Swindon Town and we drew the game 1-1. Touch wood, I have remained a first-team footballer ever since.

My overriding memory of my time at Derby was seeing the club evolve from a poor team at the Baseball Ground to a side that finished as high as eighth in the Premiership at Pride Park. Having got promoted under Jim Smith in the 1995-96 season, I didn’t think much of that achievement at the time but looking back, it’s the only major silverware of my career. At the time, a lot of the younger lads took it for granted that this kind of thing happened regularly, but it’s only as you get older that you realise that you have to treasure any success that comes your way.

Jim was instrumental in getting us up and he had a big bearing on my career, likewise Steve McLaren who was our coach at the time. They helped me reach the level that I am playing at today, but I’d like to think that I’ve more than repaid the club, considering they got me for nothing and sold me to Blackburn for £3.9million.

It was a sad day when I left Derby after ten years but you could sense that for financial reasons, the team was starting to break up. One of the big disappointments was letting the likes of Chris Powell and Gary Rowett leave, then Christian Dailly was sold for £5million and it signalled the end of that era. The club started looking abroad for cheaper players who were not as good as those being sold – so although I wasn’t looking for a move myself, when the chance came along to play for Brian Kidd at Blackburn, I had no hesitation in moving on.

There seemed to be a buzz about Blackburn when Brian Kidd got the job and he was buying high profile players and building a very good team. I remember playing against them and although we won 1-0, I thought that with a couple more players, they could really go places. Although I never dreamed I would be one of those, I was delighted to put pen to paper, even though the club was in a perilous position near the foot of the Premiership table.

I joined in March 1999 on transfer deadline day and, unfortunately, we did fall through the trapdoor at the end of the campaign. I don’t beat myself up over it or think it was my fault and with the excitement and euphoria of joining a new club and buying a new house, it didn’t really sink in that I would be playing in Division One the following season. I just wanted to go out and get the club back into the top-flight at the first attempt but it wasn’t to be. Brian paid with ultimate price with the sack but I really enjoyed my time playing for him; it was a great experience and I appreciate everything he did for me during his time at the club.

When we got relegated, I made it clear to the club that I only wanted one season in Division One because I didn’t want it affecting my international chances. Brian’s departure came halfway through the following season, then I broke my foot and by the time of my return, Graeme Souness had taken over as manager. Contrary to what some people think, we got on fine and I was still the club captain. Unfortunately, it didn’t look as if we would be gaining immediate promotion back into the top-flight, so I made it clear to the new boss of my intentions to get back into the Premiership the following season.

He was fine with that and told me to have a real think about it over the summer. When we reported back for pre-season, I hadn’t changed my mind and within the opening couple of months of the campaign, I joined Coventry City with his blessing. Certain sections of the press didn’t want us to get on because they were trying to build up this illusion that he didn’t like Catholic players, being a former Rangers man himself. Yet he was very fair to me, Jason McAteer, Alan Kelly and Damien Duff – who is an integral member of his side today.

Back home. Back down!

One of the main reasons why I joined Coventry was getting my family back to the Midlands. Although they had settled well in Lancashire, we’d had enough of being so far away from our family, and when I saw that City had the longest unbroken spell – apart from Arsenal – in the top division, I never thought we’d get relegated. We were fourth from bottom when I signed and once I’d met Gordon Strachan, I knew I was playing for a manager that I’d really work well with. Unfortunately, he’d been at the club five years and was coming towards the end of his reign and we did end up getting relegated. It was a case of deja-vu and I was absolutely devastated when we went down. In the centre of midfield, I felt responsible for what had happened because you have a bearing on how the game goes and the tempo the team plays at, so I took it hard. I couldn’t believe it had happened again and when I joined the club, we still had a fair amount of the season to go and there was a belief that we would survive.

On the positive side, I was really enjoying my football, felt settled and had the belief that we would bounce straight back up. Unfortunately, the players didn’t adapt to life in Division One as well as we should have done and sitting halfway in the league after 12 or 13 games, Gordon was sacked and replaced by Roland Nilsson. We then went 12 games unbeaten, the dreaded curse of the Manager of the Month award kicked in, and the season went on a downward spiral again. Fortunately, my own form held strong and I was aware that a few clubs had started to show an interest in me. Everton, in particular, had apparently been chasing me for some time so when a concrete offer was made, I felt it was the right move for me.

It wasn’t until I joined Everton that I realised how big a club they are. I signed for Walter Smith but had only been at the club for two-and-a-half weeks when he was sacked and replaced by David Moyes. As sad as it is to see anyone sacked, if we’d carried on the way we had been going, we would have been relegated, and it was the right decision by the club.

We’ve all been delighted with the way the new manager has come in and lifted the club. He’s a young manager and that will benefit us because he’s in touch with the players and open minded about coaching and diet methods, so I’m glad to be a part of it. I played in his first two games, which were both wins, but unfortunately suffered a knee ligament injury in the third – but I’m looking forward now, not back, to a long and successful spell at Goodison Park.

Proud to be Irish

I qualify to play for the Republic through my grandparents on my mother’s side and I first got an indication that I was wanted by Jack Charlton’s set-up when I played for the English Football League side against a Serie B team in Italy. The following season, I got an England under-21 call-up and an Irish call-up on the same day – so it was a case of making my choice.

There were no second thoughts as Ireland had always been my preferred choice and I was delighted and proud to step out in the green shirt for the first time. I made my full debut against Romania in the last group game of the Euro 2000 qualifiers and I don’t take my call-ups for granted; it is an achievement for any player to be called up and I know that I have to keep performing to remain in Mick McCarthy’s plans.