As long as I can remember, I’ve kicked a football. I remember going to the shops for my mum and always having a ball by my side.
I was brought up in Bradley, a district of Wrexham and it wasn’t long before I was playing for my primary school side. In fact, I remember playing for the fourth year when I was still in year two and in those days I played everywhere. If there was a corner to be taken, I was there, likewise the free-kicks, corners and penalties!

At the age of 11, I joined my first club side, Llay United, and I scored 74 goals in 28 games one season, breaking the Wrexham and District goalscoring record. Yes, it’s hard to believe now, but in those days I was a centre-forward and it wasn’t long before I was attracting the attention of a number of scouts. Things really started to take off when I joined my Dad’s side, Bradley Youth, and I was invited along to join Crewe’s Centre of Excellence. I attended most weeks, but when Manchester United expressed an interest when I turned 13, there was only one club I wanted to play for.

Every school holiday I trained with United and as it was only 45 minutes from home, I really felt comfortable in my new surrounds. In those days, Eric Harrison (now my coach with Wales), Brian Kidd and Nobby Stiles were our coaches and I learnt a great deal.

Coming through the ranks with me were a number of unknown players who would become massive stars of the future: David Beckham, Ryan Giggs, Nicky Butt, the Nevilles, Paul Scholes and Keith Gillespie. We went on to win the FA Youth Cup together and a number of the aforementioned names were already starting to make their mark in and around the first team.

Unfortunately, it wasn’t happening for me and it was inevitable that I would eventually be shown the door. With the likes of Mark Hughes, Brian McClair and Dion Dublin established, Alex Ferguson said he didn’t need anymore strikers and it was a sad moment to leave all my friends behind. I thought I was good enough to join them as I was scoring 14 or 15 goals a season, but he didn’t agree and told me to go out and prove him wrong. So it was back to Crewe to make a name for myself, with a determination to really prove to Fergie that he had made a mistake.

I had no hesitation joining Crewe, even though there was a huge gulf with United in terms of stature. Dario Gradi had assembled a fantastic side and he really had a knack of turning players into Premiership-quality stars. At the time, we had the likes of Danny Murphy, Dele Adebola, Seth Johnson and Neil Lennon in the side and it seemed like we were selling one of them every two months or so! But the great thing about Dario is that he always has the players’ interests at heart and he wouldn’t sell a player until they were ready for the top-flight.

I had three very successful seasons at the club and having reverted to my new role in midfield, I had come on in leaps and bounds. By the end of my third season, I had played 41 games, missing the other five due to international with Wales, and felt it was time for me to move on. My decision costs me a place in our play-off final appearance at Wembley that season, which still rankles with me, but it proved to be the right decision because I was soon on my way to join Martin O’Neill at Leicester, in a £650,000 deal in 1997.

By all accounts, it was Danny Murphy who Martin was originally interested in signing from Crewe. He came to watch us against Wimbledon one evening, but it was me who caught his eye, having put in one of my best performances for the club.

I was soon on my way to Filbert Street to fulfil my ambition of playing in the Premiership and I am indebted to Martin for having so much faith in me; I like to think that I never let him down. In fact, Martin is the best manager I have ever worked for; he’s got an aura about him and he always seemed to get that extra 10 or 15 per cent out of his players and that was a key to our success. He made me what I am today and I’m sure the Foxes fans will never forget the good times under his leadership.

Personally, the highlight for me was winning the Worthington Cup Final in 2000, having lost to Spurs in the dying minutes just a year earlier. To walk up those Wembley steps a winner is something only few people achieve and I’m proud to say I did it in a Leicester shirt.

Under Peter Taylor, we never seemed to be able to reach the peaks we achieved under Martin as the new man brought in new players and his own ideas. It also proved to be quite a difficult period for me on a personal level.

I became embroiled in a few incidents on the pitch, that have carried over into this season, and have even been labelled a cheat in certain quarters of the press. Anyone who knows me is aware that I am a committed footballer and I play to win, but I always look to do that within the rules of the game.

This season I have played some of my best football, yet still I am vilified in the press and portrayed as a villain. For this reason, I have decided to keep my distance in terms of my media profile, preferring to do all my talking on my website.

Fighthing for Survival with Foxes

The appointment of Harry Bassett and Micky Adams has been good for Leicester and their arrival has gave us a fighting chance of staying up. When they first arrived, the morale among the troops was really low, but they’ve lifted the place and Micky’s input in training has been very enjoyable. From what I’ve seen, I’m sure he will go on to become a top manager with Leicester now Harry has handed over the reins.

As soon as our relegation was confirmed I was devastated by the prospect of playing in the Nationwide League. I still thought there was a lot to look forward to and with three years left on my contract I would have been happy to stay, but relegation hit the club hard financially. As one of the more valuable assets the club has to consider offers as part of the inevitable cost cutting so when Micky Adams told me he’d accepted an offer from Birmingham City I wasn’t very surprised.

The two clubs agreed a fee on the Friday and I signed the following Thursday, but as soon as I met up with Steve that Monday I’d made my mind up. Having worked with him during my early days at Manchester United, he always came across as a leader and an inspiration to his team-mates and there’s no doubt he has continued that into his managerial career. I’d also worked with his assistant Mark Bowen in the past with the Wales squad, so St Andrews seems like the ideal place to further my career in the Premiership and Internationally.

Of course there was a great deal of sadness leaving Leicester because I spent four and a half happy years there. We didn’t have the best of times in that last season, but I have played my best football so far at Filbert Street and established myself as a Premiership player. Hopefully I can eclipse that again and help establish Blues in the top flight – if we can sustain our position in the Premiership for a few years, then we can become massive.

I feel particularly proud to have represented my country at every level from the age 14 and along with Sheffield United’s Robert Page, we are the only players in our country’s history to have achieved the feat. I owe Wales a great deal, in fact it was Bobby Gould who converted me from a striker to a midfielder in my under-21 days and I haven’t looked back since.

I’ve now made over 25 appearances for my country and I feel like an integral part of a squad that has a massive future. When you look at the likes of John Hartson, Simon Davies, Giggsy, Craig Bellamy and myself, we have the nucleus of a side that can play together for years to come. We missed out on the World Cup this time around, but I honestly believe that if we started that qualification tournament today, we would qualify no question.

We’ve always been criticised in the past for having good individuals but never producing as a team but under Mark Hughes, that is starting to change. We’re also far more solid now and with Chris Coleman waiting to come back and Danny Coyne set to have a huge future between the posts, there’s a solidity that maybe we never had before. 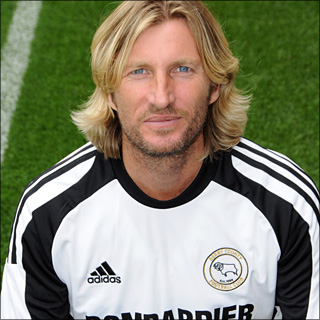